Founded on the 24th of October 1904, when 16 gentlemen met at the Zwartkops Rowing Club in the little Village of Redhouse, under the chairmanship of Mr R.P. Jones, to inaugurate a sailing club at Redhouse.Mr J.C. Carden (first manager of a Springbok Rugby team to tour the UK) proposed that the name of the club should be “Redhouse Sailing Club”, seconded by Mr T.V. Paterson. At the very next meeting (4th December 1904) the name was changed to “Redhouse Yacht Club” to avoid clashing with the existing “Redhouse Swimming Club”.

The annual fees were set at 10 shillings and sixpence.

The first Committee consisted of: 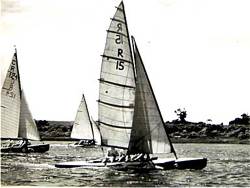 A proposal by the Beaconsfield Sailing Club (subsequently the Zwartkops Yacht Club) for the establishment of a challenge cup was considered and led to the famous (sometimes notorious) annual River Cup event. The adoption of the motion was proposed by Mr Carden and seconded by Mr Girdlestone.

The first ever race under the Club colours featured three boats, respectively five, three and two tonnes in weight. By comparison, modern day Lasers and Optimist racing yachts are governed by a minimum weight of 55 and 35 kilograms!

Since that faraway time, the RYC has lived through some turbulent times. It had its beginnings in the gracious Edwardian era, but ten years later World War I intervened, and while the world was changing forever, not much sailing took place on the River. 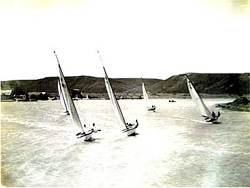 But the RYC survived, and then lived through the terrible influenza epidemic of 1919, the Great Depression that devastated the world economy in the late 1920s and World War II.

During the years between the wars, the predominant boat on the River was the scow, mostly twenty-footers, but some were twenty-five footers and carried a crew of up to five, generally including a “bailer-boy” whose job it was to keep the ship afloat!

After World War II many RYC members from the fields and oceans of far-flung battlefields and were joined by many others who were attracted by the holiday lifestyle enjoyed at Redhouse. Yachting began to grow and new classes of racing boats were introduced. In those days there were few aquatic sports available, other than swimming, and sailing gained many adherents. 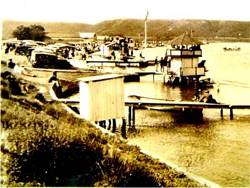 The 50th Anniversary of the Club in 1954 was celebrated by the staging of a National Regatta at RYC. In those days all classes sailed at together, as numbers were sufficiently small for the Zwartkops River to be a viable venue. Also, life moved at a more leisurely pace than our present hectic period so such a regatta could run for over a fortnight.

Over the twenty years substantial fleets of Sharpies, Sprogs, Sailing Canoes, Dabchicks, Flying Dutchmen, Finns, Wingers, Tempos and Fireballs, plus the odd Spearhead, Andy and OK One Design, provided keen competition, huge amounts of fun and much discussion around the bar in what was essentially a male sport.

By the early seventies, the Mirror class made its appearance and more women and children began to become involved.

Junior sailing was boosted by the appearance of the Optimist single-handed dinghy, which has served as the training boat for our sailors ever since, producing a thirty year-long contribution to the ranks of South Africa’s best sailors.

By 1975 the single-handed Laser had made its appearance at RYC and effectively closed down most of the larger classes of boat owing to its simplicity of design, ease of maintenance, speed on the plane and the sheer excitement it generated.

The RYC has maintained its role as the local centre of dinghy sailing, surviving the challenge of catamarans and sailboards and the arrival of numerous other aquatic sports.

As it enters its second century, the RYC embraces the challenge, that of bringing the excitement and pleasure and good, clean fun of sailing to all the people of the new South Africa and is to this end currently busy with more than one transformation and development programs  .